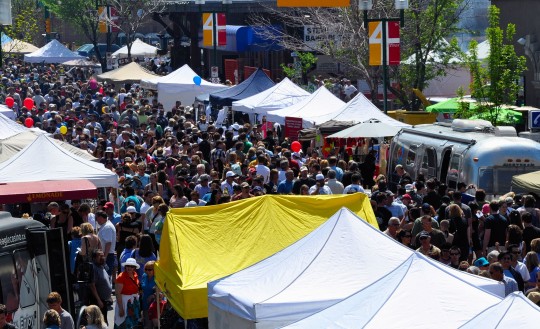 The lilac Festival took place this past weekend, and here's how it went...

CALGARY — Clouds and the occasional drizzle didn’t hamper spirits at the Lilac Festival on Sunday as thousands turned out for the annual street celebration that took over several blocks of 4th Street S.W.

With temperatures hovering below 10 C for most of the day, some vendors estimated that attendance would be down this year.

But many hardy Calgarians endured the chilly weather and were rewarded with a couple of hours of sunshine late Sunday afternoon.

“If I waited for nice weather to do things, I’d waste half of my life,” said Fernando Herrera, who brought his two daughters to the festival.

Despite the odd rain shower, dense crowds circulated up and down 4th Street, as people flocked to the Mission district festival for food, shopping and music.

A flotilla of food trucks parked along 4th Street formed a “food truck alley” and attracted crowds of hungry Calgarians.

Lured by the promise of the “baconiest” sandwich, Toronto-transplant Jodi Rukavina ordered a Bacon Storm sandwich at the BLAM!Wich food truck.

“Bacon is usually a good. The sandwich is delicious. It’s got ham, bacon and cheesy sauce,” said Rukavina, who moved to Calgary six months ago.

The young school teacher said she’s enjoying what the city has to offer.

“I was looking for fun things to do and I heard the Lilac Festival was fun.”

Rain showers didn’t stop a troupe of salsa dancers from turning up the heat in a street performance of Cuban dancing.

“You don’t need to wear a lot of layers to stay warm when you’re salsa dancing,” Jenna Lakusta joked.

More than a 100,000 Calgarians are estimated to have made their way through the festival grounds Sunday between 10 a.m. and 6 p.m.

Email ThisBlogThis!Share to TwitterShare to FacebookShare to Pinterest
Labels: All Posts, Culture