Great article by Fairways and Greens listing Kananaskis Coutry Golf Course as a top contender to host a PGA Tour event.  These tracks have the goods to test the pros... 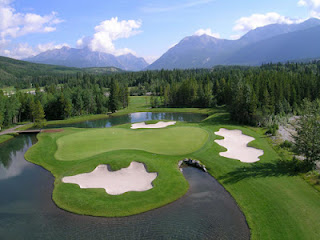 Like the golfers who play them, courses that host PGA Tour events are among the best in the world. But just because a course isn’t on the schedule doesn’t mean it can’t offer a Tour-quality experience. The below is a list of courses so good, it wouldn’t be a surprise if they hosted a "big show" event in the coming years, either stateside or as far away as an island just off south China coast.

Old American Golf Club (The Colony, Texas)
Old American Golf Club is to golf as Cowboys Stadium is to football. While both are relatively new, they are already being hailed as a one-of-a-kind experience. The Dallas-area layout is the work of vaunted designer Tripp Davis and PGA TOUR star Justin Leonard.

TPC Myrtle Beach (Murrells Inlet, South Carolina)
Tom Fazio is a name that’s synonymous with championship golf; his work at TPC Myrtle beach is among his finest. The course ventures through the towering pines and expansive wetlands of the “South Strand” Lowcountry, providing a stern test for even the best sticks. TPC Myrtle Beach is no stranger to championship golf. It hosted the 2000 Senior Tour Championship.
www.tpcmyrtlebeach.com
Mission Hills Hainan – Lava Fields Course (Haikou, China)
One of 10 courses at Mission Hills’ exotic new resort on China’s tropical Hainan Island, Lava Fields has earned significant acclaim since opening last year. Designed by American Brian Curley of Schmidt-Curley Design (www.schmidt-curley.com), the par-72, 7,475-yard track boasts perhaps the best hole among the 180 at Mission Hills Hainan, the 575-yard, par-5 18th. As the TOUR continues to discuss bringing a full-field event to China, Lava Fields is sure to garner strong consideration.
www.missionhillschina.com
Kiva Dunes (Gulf Shores, Alabama)
Long considered one of the Southeast’s best tracks, Kiva Dunes is a links layout hugging the Gulf Coast. The Jerry Pate-design stretches to 7,092 yards from the tips, and while its fairways are inviting, the ubiquitous Gulf Coast winds give the course some serious teeth.
www.golf.gulfshores.com
The Dye Course at Barefoot (Myrtle Beach, South Carolina)
The Dye Course at Barefoot Resort in Myrtle Beach is quintessential Pete Dye, and host course for the Hootie and the Blowfish Monday after the Masters Celebrity Pro-Am. Stretching over 7,300 yards from the back tees and bordering the natural white sands of the Carolina Bays, Dye challenges golfers to navigate numerous hazards and wetlands. In addition being one of the premier tracks in the Southeast, Barefoot Resort’s innumerable accommodations and amenities, combined with its convenient, Central Grand Strand access, make it an appealing site for players and fans alike.
www.barefootgolf.com
Longaberger Golf Club (Nashport, Ohio)
At 7,243 yards, Longaberger Golf Club is a meaty parkland-style layout about a 50-minute drive east of Columbus. Consistently cited as one of the U.S.’s premier public courses, Longaberger is chock-full of dramatic holes, including No. 4, a 565-yard par-5 with a 150-foot elevation drop from tee to green.
www.longabergergolfclub.com
Burnt Pine Golf Club (Destin, Florida)
Burnt Pine Golf Club at Sandestin Golf and Beach Resort is a Rees Jones track that’s earned the reputation as one of Florida’s most challenging. From the 7,001-yard back tees, the course plays to a stout slope and rating of 144 and 74.7, respectively. Burnt Pine is more than just length; set along the Choctawhatchee Bay, water is omnipresent. The combination of forced carries and robust bay winds make club selection crucial.
www.burntpinegolfclub.com
Cinnamon Hill Golf Course (Montego Bay, Jamaica)
Montego Bay, Jamaica’s Cinnamon Hill Golf Course’s picturesque surrounds can lull golfers into a trance. The course was re-designed by celebrated architect Robert von Hagge in 2001 and is frequently cited as one of the Caribbean’s best layouts. The 489-room, all-inclusive Hilton Rose Hall Resort & Spa would provide a place for players, their families and fans to stay.
www.rosehall.com
Kananaskis Country Golf Course (Kananaskis Country, Alberta, Canada)
Kananaskis Country’s Mt. Kidd Golf Course is more than 7,000 yards of golf that’s bookended by two of the toughest holes in the Great White North. The Mt. Kidd course greets golfers with a 455-yard par-4 to begin the round; the final hole is a 642-yard par 5. The course is near Delta Lodge, site of the G-8 Summit, and Canmore hosted several Olympic spectators, making rooms and access via major highways always available.
www.KananaskisGolf.com
Posted by Scott Stevens

Email ThisBlogThis!Share to TwitterShare to FacebookShare to Pinterest
Labels: All Posts