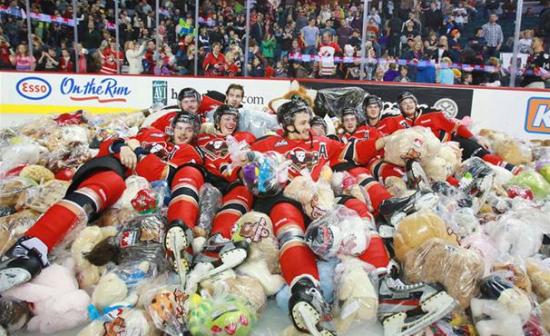 Winter is in full swing for us Calgarians, which isn't always a bad thing.  There's obviously not much outdoor golf happening, but there are still some golf options such as the RCGA Golf Centre or Metro Fairway, which is a new golf simulator lounge.  I typically enjoy the winter season, with the excitment surounding Christmas, and following the Calgary Flames.  Sadly, there won't be any 'Sea of Red' or 'Red Mile' going on this season, but the WHL and the Calgary Hitmen are proving to be a pretty good alternative.

If you're a hockey fanatic like me and have been missing the NHL, I'd highly recommend checking out a Hitmen game.  About a week ago I had the pleasure of attending the annual Calgary Hitmen Teddy Bear Toss, in a game where they faced off against the Kootney Ice.  For those of you unfamiliar with this event, fans are encouraged to bring teddy bears to the game and anxiously await the first goal by the Hitmen.  Once the Hitmen score their first goal, the building errupts and teddy bears rain down onto the ice.  It's difficult to describe unless you experience it for yourself; the sight of over 20,000 teddy bears flying through the air and onto the hockey rink, is pretty unique.  That's right, over 20,000 teddy bears! 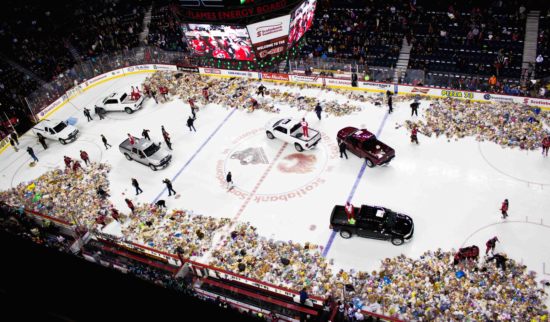 It took the volunteer crew nearly half and hour to scoop up the 21,453 stuffed animals.  What do they do with  over 20,000 stuffed animals?  They've partnered with 50 plus agencies and charities such as the Alberta Children's Hospital to help bring smiles to the lives of young children.  Hitmen players personally delivered 400 bears to kids at the Alberta Children's Hospital last Monday.

So, hang in there, get out and play some indoor golf, check out a Hitmen game, and enjoy the Christmas Season!

Email ThisBlogThis!Share to TwitterShare to FacebookShare to Pinterest
Labels: All Posts, Culture