“COBRA is certainly bringing something new and fresh to the industry with this campaign,” commented John O’Hurley. “They’ve been known for producing innovative products for 40 years since the very 1st Baffler and I couldn't pass up the opportunity to work with them on this breakthrough product launch."

The video, ‘Mankind’s Greatest Achievements’ is the first in a three-part series from COBRA Golf and John O’Hurley. The next episode will be released in January and the final episode in April. Fans in the US have a chance to win a set of Baffler Hybrid Irons by visiting www.facebook.com/cobra and uploading a photo of something they consider to be one of mankind’s greatest achievements. Fans can also join the conversation on the video and the Baffler on Twitter using the hashtag #golfmadeeasy 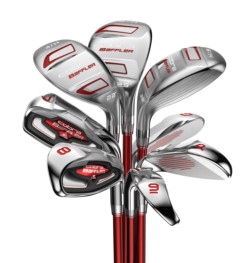 Email ThisBlogThis!Share to TwitterShare to FacebookShare to Pinterest
Labels: All Posts, Equipment