So, You Want to be a Golf Pro? 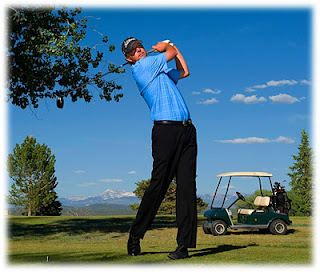 Have you ever watched a golf match on TV? If you love golf as much as I do, you have probably spent many a Saturday and/or Sunday afternoon watching the professionals do all the same things as you do - drive the fairways, chip onto the green, putt, and even get themselves out of trouble now and then. You live each shot with each golfer, ponder and figure out each stroke as you mentally stroll up the fairways with them, and it feels so real that you even find yourself whispering. But when it's over, you always have to do the "armchair golfer's reality check." That's when you look at the number of times they each hit the ball and know in your heart that it's less times than you would.

You've also most likely spent as much time as I have wishing you were out there playing with them, making incredibly long and straight drives, pulling off impossible chip shots, and sinking unsinkable putts. More than once, you've probably said to yourself, "I wish I could play like that." You know you are capable and you have always dreamed of being a Pro golfer, but you just don't don't know how you'll ever become a good enough golfer to be a Pro.

Several years ago, I was watching the US Open with a golfing buddy who I knew was imagining himself on the tour. He's always wanted to play professional golf as long as I've known him and over the years, he'd played in a number of amateur tournaments, hoping to break into the professional ranks, but he always fell short. As we watched the match, I could tell he was becoming agitated. He criticized every imperfect shot and implored the golfers with sarcasm and even outright scorn at times. Finally, I asked him what was going on with him.

He got real quiet and he looked like he might jump up and run out of the room, but finally he said in a hushed voice, "I just don't think I'll ever make the big time." He was downright despondent and I knew how he was feeling - I had been there too - so I decided that the time had come to get him to really confront the reasons he was not playing in the US Open and help him find the golf pro inside of himself. He was looking at me expectantly and I know he was waiting for a hearty, "Oh sure you will - just keep at it - you'll make it." So he was not a little bit surprised when I said, "Well, friend, you certainly never will if you keep telling yourself that."

I continued quickly before he had a chance to throw a Golf Digest at me: "Look at those guys and tell me what you see." He looked at me like I had sprouted golf tees out of my head but then he looked at the TV and watched for a moment as Tiger Woods strode onto the green amid wild cheering and applause. He acknowledged it all with a slight nod and a smile but he never broke stride. My friend said, "I see a Pro." I pushed him further: "What is it about him that makes you say that?" He pondered that for a moment and something seemed to click inside of him and he got serious. Here's what he saw:

- He's confident. He's good and he knows it.

- He's focused. He's aware of the crowd and the pressure of competition, but is concentrating on his game

- He's determined. If he makes a bad shot or misses a putt, he reacts but then you see him mentally shifting into a "what went wrong and how do I fix it" mode.

- He's measured. He doesn't take any shot in a hurry; he studies his lie, the course around him, the prevailing wind or lack of it, and what's between his ball and the hole.

He turned to me and said, "Wouldn't I just love to get inside his head when he's studying a shot?" We laughed and then I told him seriously that it wasn't Tiger's head he needed to get into - it was his own head. I reminded him that he is the only one who can manage his game . I said, "You know the rules; you know how to play a course and not let a course play you. You know how to hit the ball and you are a consistent player. You have a strong, smooth swing and a steady putting hand." He was beginning to look a little embarrassed at all the praise, so I tempered it a bit. I said, "You also know the weaknesses in your game. You know what you don't do so well just as Tiger Woods knows his most common mistakes. You just have to do what Tiger does - do whatever you need to do to eliminate them."

I assured him that no golfer will ever be perfect but that is still the goal of every player of this game. There's no other way to get even close to that goal but to pay attention to those times when you miss a green or shank the ball or hook it into the trees. Stop and think, "What did I do wrong?" I looked at him with a little smile and said, "You'll know. You always know exactly what you did wrong. Your main job is to identify those things and eliminate them from your game. If you topped the ball, you probably looked up too soon; don't do that again. If you hooked it, you probably pulled your swing; don't do that again. If you missed a putt, you probably misread the green or lost sight of the ball; don't do that again. Every time you make a mistake, treat it like the first one and the last one." You see, I believe that 90% of the game of golf is mental.

Get in your own head.

I know that sounds crazy when everything about golf is physical - swinging, walking, stroking, climbing to the greens, searching the traps and ravines for your ball. Even if you ride a golf course, you are always doing something, but unless you do all of it with a positive mindset, you will not do it well. I'm sure my friend and all of my readers know this: the difference between a 1- or 2-handicapper and a scratch golfer is not the number of strokes in your game - it's the number of mistakes you made. It's the mental errors that make you misread a green or cause you to lose your concentration during a putt. It's an attitude that blames the tall grass on the fairway or the wet greens instead of discovering what you did and concentrating on making it better.

How to be a Golf Pro in a year.

By now, the match on TV was over and my friend seemed anxious to leave but I gave him one last little list of tips on how to be a Pro, assuring him that if he followed them, he could be on the tour in a year.

- Play the game within your abilities. You are good - know it and play like it.

- Manage your game - make the most of your strong points and improve your weak ones.

- Practice the shots that need work; drive a bucket of balls a day, take another bucket of balls and dump them in sand traps, in the woods, behind trees, in high rough and then figure out the best shot to get out of the mess and take it. If you don't hit it well, go get it, bring it back and do it until you get it right. Spend at least an hour a day on the practice green. Putt from everywhere but especially from the spots that seem to defy you.

- Above all, play as often as you can and play with the best golfers you can find. Find pros, plus handicappers, anyone who consistently beats you on the course.

- Play to win but watch the better golfers - how they approach their shots, their strategies and tactics. Pick their brains to find out what they're thinking about their game; pick up their positive attitude and steady rhythm. Play to win but learn from the masters.

This article was written by Keith Matthews.  Keith is keen to share more of his golfing tips and experience so sign-up for his free weekly emails at TopGolfTipsHQ.com.
Posted by Scott Stevens

Email ThisBlogThis!Share to TwitterShare to FacebookShare to Pinterest
Labels: All Posts